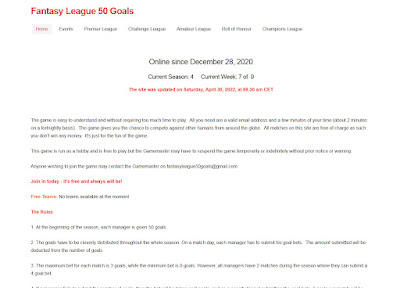 The game is easy to understand and without requiring too much time to play - each player gets 50 goals to distribute on 25 matches during season in a way he can beat others in matches.On average you have 2 goals per game available, but so is everybody else, so you have to decide when use more of them to win matches, but not too many, so you would have some goals left for the rest of the season.

The rules are simple:

1. At the beginning of the season, each manager is given 50 goals.

2. The goals have to be cleverly distributed throughout the whole season. On a match day, each manager has to submit his goal bets.  The amount submitted will be deducted from the number of goals.

3. The maximum bet for each match is 3 goals, while the minimum bet is 0 goals. However, all managers have 2 matches during the season where they can submit a 4 goal bet.

4. If a manager fails to submit the number of goals, then the bet will be taken as 0 goals, and as a penalty for not submitting the goal bets, 3 goals per match will be deducted from the remaining balance.

5. The goal bets of a bot team [without a manager] will always be 1 goal per match.

6. Unused goals will NOT be carried forward to the next season.

7. A season consists of 9 weeks and each team will play 25 matches throughout the season.

8. If a manager fails to submit his bets for two consecutive weeks, he will be removed from the game.

9. If at the end of the season a team is still being managed by a caretaker manager, that team will have 6 points deducted from total points. 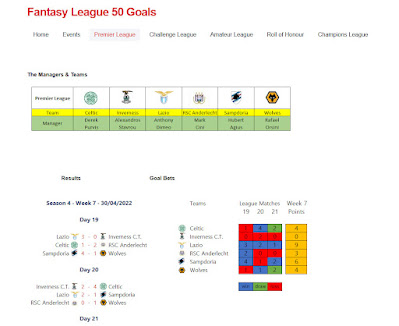 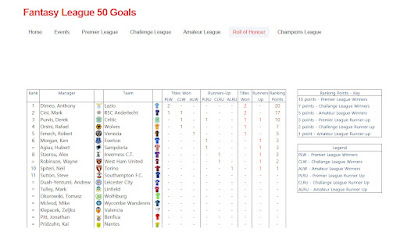 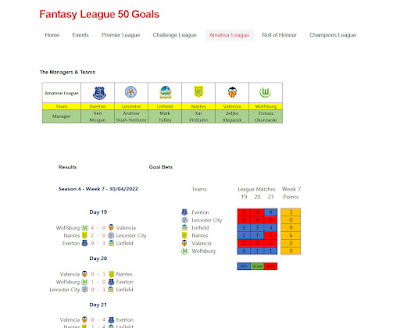 Posted by soccermanager No comments:

Two Germans, Jensa Onnen and Werner Krahe, started experimenting with football manager games in late 1980s with... not great results to be honest. But just few years later, together with Software 2000, they came up with new take on the soccer manager genre that it shaped the future titles for long years. Their Bundesliga Manager game (later version was called Bundesliga Manager Professional) wasn't in theory that different from the others, but in some way it actually was. While games of the genre were based mostly on text and (at best) simple animations, they went to produce game that not only had quite impressive interface, but also used complicated animations to present goal chances. 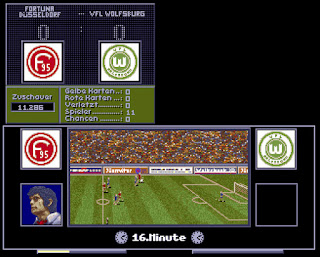 While the idea with animations wasn’t new, even Spectrum Football Manager used them, in Bundesliga Manager they were not only better, but also complex and fitted perfectly with the rest of the interface. On the other hand the players were described using only three parameters (skill, fitness and form), but the way it was presented was enough to keep users busy for a long time. What is more the animations were only tip of the iceberg - Bundesliga Manager had managerial options that were absent in other titles, like signing sponsorship deals for ads around stadium, sending team to training camp or improve parts of the stadium. 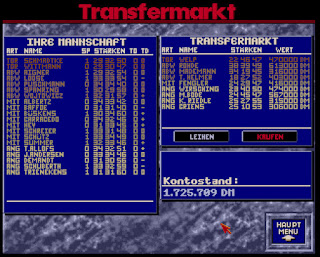 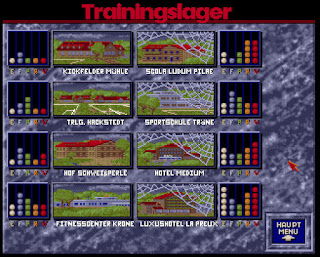 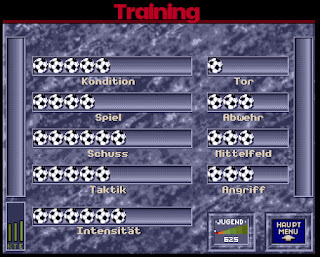 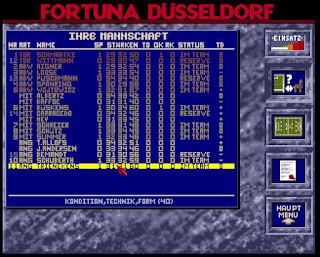 Of course with limited number of animations available with time the game was losing its freshness, but  then they introduced the slightly upgraded version, Bundesliga Manager Professional, which offered additional events added by the fans, which was again a novelty. The game was so popular that Software 2000 published English version, called just The Manager, which simulated the English divisions and brought a lot of attention to the title.

Overall Bundesliga Manager introduced so many new elements to the gameplay that it’s hard to imagine how the genre could have existed without them - even with very simple gameplay it was fun for long, long hours with literally matches described in newspaper, sending team to training camps, negotiating loans with bank and signing deals with sponsors.
There even was sort-of multiplayer option, in which up to 4 players could take part in the game taking in turns all the decisions for their own teams (playing on same computers). It wasn't perfect, but again it was quite new and interesting. 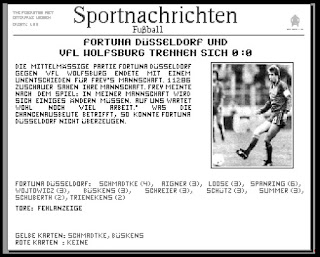 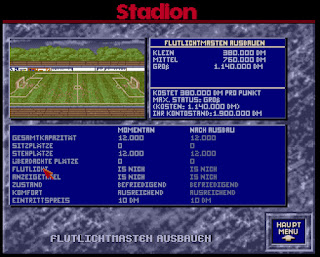 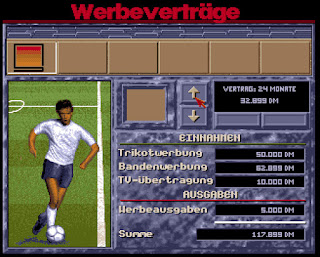 Bundesliga Manager was in many ways a new approach to the genre and lead to such classic titles as Anstoss / On the Ball and many others.
Posted by soccermanager No comments: 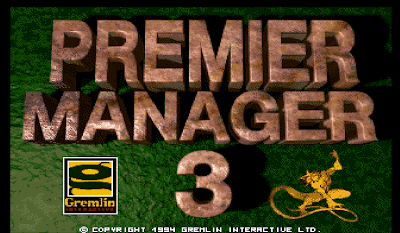 The third game of the Premier Manager series offered a typical scenario of its era, we start in the amateur Vauxhall Conference and fight for promotion to professional divisions, decent graphics and a wide range of club management options. 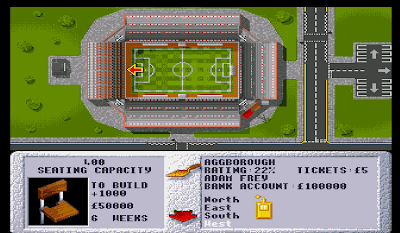 One of the main attractions was the possibility of hiring many co-workers (assistant manager, coaches, scouts, junior coach) and assigning tasks to them, which decreased the workload on our shoulders. The improvement / expansion of the stadium and the signing sponsorship contracts were increasing the ways we could improve out club - a better stadium meant more revenue from tickets, but at the same time such investments consumed money that we could not spend on transfers. 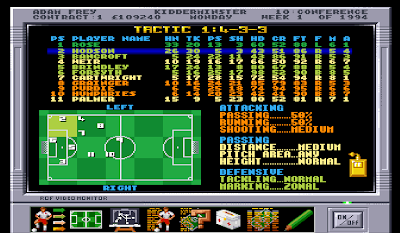 Transfer negotiations also looked a bit different than in most games - many clubs could make offers for players (open offers) and in subsequent rounds they could raise them, but at the end the player made the decision which club he wanted to move to (which resulted in making it very hard to sing a decent player for amateur conference team).

In general a complicated game, the match presentation was perhaps not the best one, but it was possible to very precisely determine the positions of the players on the field depending on which sector the ball was in, and then during the match watch how it works.

Premier Manager 3 was not an easy game to like, but you have to appreciate its level of development and range of options available. If you could look past its rough exterior it was a good soccer club simulation.

soccermanager
Life-long soccer manager / football manager games maniac, starting with good old ZX Spectrum games and ending with today online football manager games. For me graphic side of the game does not really matter, the most important bits are fun you get from playing it and interesting mechanics that will keep you involved for a long time. As for football manager games I prefer the old ones that had that "something" (like original Championship Manager) rather than AAA titles that lack depth.